Wexford’s Dean O’Neill met a tough opponent in Kyle Dunne from Kilkenny in this Leinster final. O’Neill fought hard throughout the match and he can be proud of his performance as he left everything in the playing area but on the day the Kilkenny player proved too strong.

A great win for the young men of Wexford as they defeated the Kilkenny pairing. A combination of good solid serving coupled with good movement in the alley proved the key to this victory. Kavanagh and Moore displayed good excellent shots throughout this match and well deserved their winners medal.

Glen Murphy produced a terrific performance to take another Leinster title.
The Wexford player made a good start and kicked in from there. To the credit of the Kilkenny player he fought hard for every point and was a little unlucky at stages.

Once again Wexford and Kilkenny renewed their rivalry in this Girls U-14 doubles and to the credit of the young Wexford ladies triumphed in this encounter.  Both Sweeney and Creane got into their rhythm early in the first game and secured an early lead.  The Wexford pairing were in terrific form on the day and eventually ran out winners of both games.


this Leinster final and their Kilkenny opponents proved too strong on the day. Both Wexford players hit some excellent shots in patches of this game. There is no doubt that both these young Wexford men will cross paths with the Kilkenny pairing again and will go in search for a turnover in a rematch.


William Murray-Byrne lost this Leinster final to his Meath opponent. The Wexford player who was selected for the singles event show good ability off both sides throughout this encounter.  However his Meath opponent was playing at a very high standard and was not for beating on the day.
Boys U-15 Singles   Anthony Butler (Wexford) beat Jack McCarthy (Westmeath) 2-0
Anthony Butler really dug deep in this match and was forced to grind out a result.


The young Ballyhogue man showed great grit and determination in this match.  Jack McCarthy , brother of All Ireland senior 60 x 30 championship Eoin McCarthy , had high expectations coming into this Leinster final but Butler had only a winners medal on his mind and he was a well deserved winner of the same.
Boys U-15 Doubles Cathal Barry/Eoin Regan (Kilkenny)  beat Adam Hanrahan/Patrick Boland (Wexford) 2-0
The wexford pairing can certainly hold their heads high after this performance in the boys U-15 doubles. Both players made some excellent kill shots at different stages but their opponents too displayed a high level of skill. 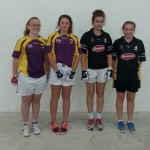 A good performance from the Wexford ladies who were clinical on the day. They showed no mercy to their Kilkenny opposition and were well worth their win. This pairing are a very strong force and will certainly dominate ladies handball as they progress through the underage system.

Dunne from Kilkenny.  Kavanagh who won the county championship certainly showed some excellent handball over the course of this game will relish the chance of playing his Kilkenny opponent in the small alley once it comes around. 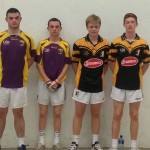 this Leinster final. The Wexford pair had both style and power but their Kilkenny opponents had a little extra and prevailed in this contest.  There was some very good rallys and the wexford pair certainly knew where the bottom of the front wall was. A little disappointed in the end but both Hall and Rossiter gave a good account of themselves.
Boys U-17 Singles   Keith Armstrong (Wexford) beat Aaron Boylan (Westmeath) 2-0

A good win for the Kilmyshall player in the u-17 singles. Armstrong showed some

excellent overhead shots into the left corner that reaped good rewards. The agility of the Wexford player was of note in this match and in the end he was a comprehensive winner.

Boys U-17 Doubles  Stevie Lawlor/Darren Murphy (Wexford) beat Jack Crehan/Conor Fahey (Kilkenny) 2-0
A good win for the Wexford pairing and both players hit purple patches at different stages of the game.
Some excellent serving and back wall play was of note in this game and the wexford players were well worth their win in this Leinster final.

A huge congratulations to all the Wexford players who competed in the Leinster championship. As can be seen from the above results our under age is certainly competing at the highest standards and a huge thanks to all the mentors , trainers and parents who help promote handball in their communities. Best of luck to all thoae players who are progressing to the All Ireland stages from the Wexford County Handball board.