It started out looking like a difficult day for the 6 Wexford players who faced quality opponents in their respective All Ireland 40×20 singles finals, but by 4.30 this afternoon a magnificent five championship winners medals were on their way back to ‘The Home of Handball’ from a variety of venues around the country.

The momentum gained from taking part in the new and innovative county championship proved a vital factor in the success this time around as Wexford’s top players benefitted enormously from being involved in the 445 match programme which took place from September 2014 to January 2015.  For the first time in many years the county system supported the intercounty players by ensuring they had a large number of games played before they entered the provincial championship and the quality of those county championships were enhanced when the grading was changed to coincide with what pertained at national level.

The decision to change the grading was instrumental in creating a level playing field for all the players as it meant they took part in the county championship in the same grade they later entered into for the Leinster championship.

It changed utterly the way our domestic programme was promoted and ensured our players were never more ready to do themselves, their club and their county proud.

The only Wexford player to taste defeat at the weekend was Marguerite Gore who went down 21-9, 21-8 to Sinead Ni Anli, Galway in the women’s junior singles decider at Nenagh. It proved a step too far for the competitive St. Mary’s handballer who has been our best player for a number of years but who, on this occasion, found the brilliant Galwegian too hot to handle.

Marguerite took the game to her more fancied opponent right from the off but was unable to prevent her from hitting winners at vital stages.

The county junior champion is likely to return more determined than ever to atone for this defeat.

Gavin Buggy regained the All Ireland Over 35 A Singles title after a three year absence when he beat the 2013 champion Dominick Lynch, Kerry 21-14, 21-18 in a cracking match at Leixlip today. 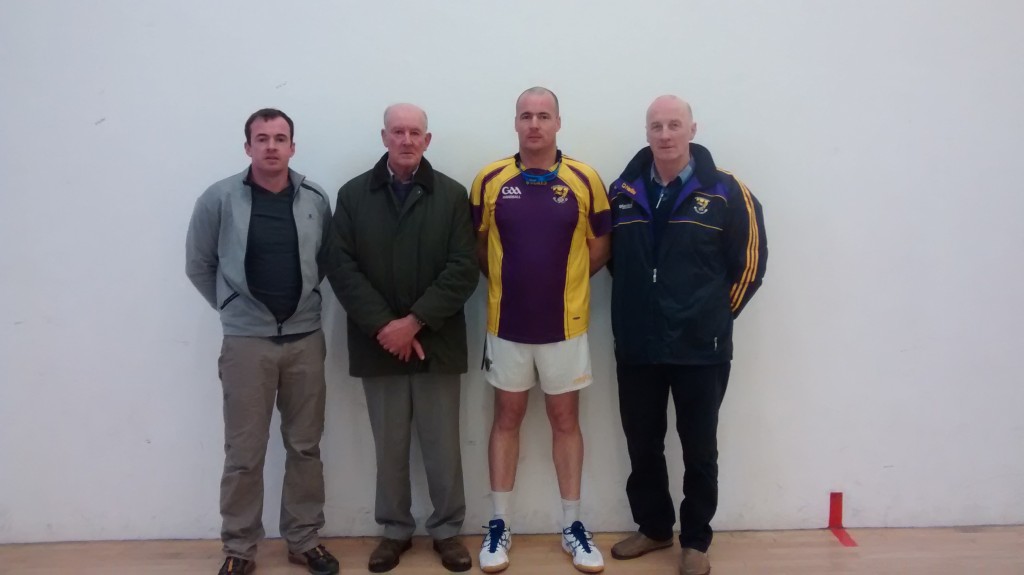 A quite magnificent performance by Barry McWilliams, Wexford secured for him the first All Ireland singles title of his career at Kilbeggan, Co. Westmeath where he comfortably saw off the challenge of Shane Bruen, Sligo to win the Masters B Singles championship in impressive style.

Prior to 2014 McWilliams had played very little intercounty handball but after making a bold but fruitless bid to win the Over 35 singles last year, he was determined to go one better this time around. He began this final by clocking up an 8-0 lead in his very first hand and after increasing that to 14-1 he continued to dominate the exchanges on his way to an emphatic 21-3 win.

The second game proved to be a lot more difficult as the extremely skillful and mobile Bruen got into the match and his admirable ability to retrieve the Wexfordman’s best efforts saw him come from 5-2 down to lead 10-7. However he was working very hard for all of his scores and devoid of a telling ‘killshot’ he was forced to rely on McWilliams missing to add to his tally. That simply was not about to happen with sufficient regularity and as the Horeswood player regained his composure after that lull period the writing was on the wall for the gallant Bruen. From there to the finish McWilliams outscored the Connacht champion by 14 points to 1 with much of the damage being done in a single service game when he went in 7-10 down and came out 15-10 up. Some of the handball played by McWilliams during that period was of the highest quality and clearly showed the benefit of a robust county and provincial championship programme.  His eventual winning margin of 21-11 was probably a little flattering but overall this was a hugely impressive performance by a worthy winner.

You just can’t keep a good player down and after his defeat in last years All Ireland 60×30 Silver Masters B Singles final, Robert Doyle, Wexford bounced back to take the 40×20 equivalent in terrific style when he defeated Mike Hayes, Clare 21-19, 21-2 at Leixlip on Saturday. The first game was hotly contested throughout, but Doyle’s preparation was such that he was replicating that situation in training on many occasions and therefore had the expertise and composure to close it out. He also had the stamina to push ahead early in the second and as his game opponent paid for his trojan efforts in the first, Doyle raced away for an emphatic success.

A nephew of the great John Doyle who partnered John Ryan to several senior doubles successes many years ago, Doyle is a terrific handball man who mixes a busy working life with being Chairperson of Wexford Juvenile Committee. He and Helen also have three young sons playing the game and the family are great supporters of Wexford GAA Handball and indeed handball nationwide.

Sometimes the good people do win!