Taghmon secure Gold in the Games 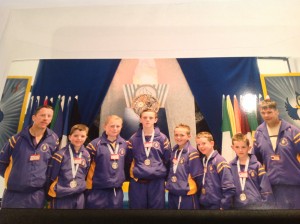 Taghmon represented Wexford/Leinster in the boys U13 One Wall Community Games National Finals in Athlone on the Weekend of the 15/16 August, where they brought back Gold to their Parish and County.

The finals of this competition consisted of three teams where a round robin system was in place between Wexford, Leitrim and Clare.

On Saturday the Taghmon team played a very good Leitrim side. The Wexford boys showed a bit more strength and skill and won on score line of 112-55 aces. This Taghmon team showed a great eagerness for the Ball Wall game and some great potential can be seen within this young bunch of handballers. The wealth of coaching experience provided by Robert Doyle and Ricky Barron was a great asset to the Taghmon team.

On Sunday the boys from Wexford were up against a very highly rated Clare side. The young stars showed all their skill and determination to win on a score line of 89-71 aces. This resulted in the Wexford Boys securing gold on an aggregate score of 201 to Wexford, Clare 139 and Leitrim 134.

The team consisted on both days of Mark Doyle and Gavin Lawlor partaking in the singles matches, Quinton Kehoe and Conor Murphy played doubles, Bobby Doyle and Jack Murphy were subs on the days. Robert Doyle and Ricky Barron were the boys Managers.

A huge congratulation to all the players and mentors on this magnificent achievement. The future continues to look bright for Wexford handball and on behalf of Wexford County Handball board a special thanks to all the parents and managers who help promote Handball within their club and community. by Helen Doyle / Padhraic Roberts