Written by Antoin Ó Braoin, Rúnaí Contae
For years it was just there on the strand, a run down relic of forgotten times. A place where people from another, older world, had beaten a ball against the single wall which had been constructed with painstaking care by the locals of Cullenstown village  back in 1912. And even though the the natives had mobilized once more in 1940 to add side and back walls and thereby make Cullenstown  a ‘proper’ court, it was to be many more years before the handball alley became a really important amenity for those who frequented Cullenstown strand.


Cullenstown beach is a beautiful place to swim, walk or fish with its picturesque location overlooking Ballytigue Burrow Nature Reserve as well as The Saltees and Keeragh Islands. Even without its handball alley this has always been a place where people gathered but as recently as the 70’s and 80’s the court played a central role on the beach as the waves rolled gently in from the Irish sea.
In the 60’s and early 70’s the sound of flying feet did sometimes reverberate around those hallowed walls but it was mainly dancing rather than handball as many people chose that particular rhythmic movement of the body as their preferred means of social interaction.
Later handball would vie with volleyball, tennis and squash for court time as the versatility of this old ‘concrete box’ was fully tested. With hurling practise also taking place at the venue it was common to see up to 40 people there each evening before the sun gradually dipped below the waterline.
Mother nature intervened in 2004 when the court and its surrounds suffered storm damage but in recognition of the importance of the facility to the local community Cullenstown Development Association carried out the necessary restoration work. 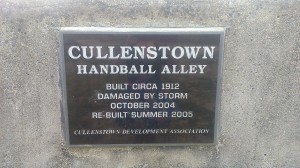 A unique feature of the court is the steps going all around the walls, possibly making it the only one in the country where you can watch the action from all four sides. It’s not difficult to visualise the scene of many decades ago when spectators made the walk up those narrow steps to get the best vantage point depending on their height and age etc. We can only assume that the younger people went right to the top while those who were less agile remained closer to ground level. Either way everybody surely got to see the game.
Remarkably that scene was repeated recently when four members of nearby Ballymitty Handball Club played a full blooded game of handball watched by a big crowd of locals and tourists who had earlier being enjoying the sunny conditions on a Sunday afternoon.
It was as though time had stood still as the patter of feet climbing those steps was heard again as Alan O’Neill, JR Finn, Shane Rossiter and Miley Byrne entertained their impromptu and delighted audience.
Maybe deep within those ancient block walls its ‘heart’ swelled with pride once more at its ability, even after all those barren years, to again become the centre of attention on Cullenstown Strand.