Galen Riordan overcame a shaky start to eventually overrun a game Ryan Mullen, Tyrone in yesterday’s All Ireland 60×30 under 21 singles semi final at Castlebridge Handball Club. A terrific lob serve to the left corner by Mullen had the Wexford player in all sorts of difficulty in the early stages of this match and as Riordan struggled to get a safe return it was the Ulster champion who dominated proceedings on his way to a 9-4 lead. 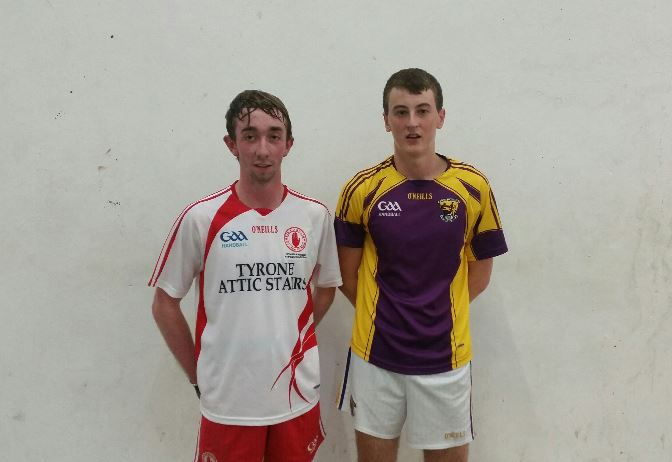 Riordan though is very resilient nowadays and when he figured it all out he was soon back on level terms at 9-9. From there he took charge and while there were many fine bouts of play it was the Ballyhogue man who produced winner after winner without conceding another point, on his way to taking the opening game by 21-9.

A refocused Mullen began the second well but after being in front in the early stages he again found the all round tactics and shot selection of Riordan difficult to counteract. The Wexfordman was ‘killing’ and passing to great effect and aided by a terrific toss off the left wall he continuously forced Mullen to operate from the back of the court. The scores were close up to the halfway point but when Riordan nosed in front again the writing was on the wall as far as the result was concerned. Mullen did battle hard from there to the finish but the talented Riordan would not be denied his place in the final as he came home a very impressive 21-11 winner.

He now meets either Galway (Darragh Mulkerrins) or Cork (Michael Hedigan) in the final.