Written by Antoin Ó Braoin, Rúnaí Contae
A magnificent performance from Tommy Hynes saw him win the Masters A Singles (40 & over) title at the GAA Handball 40×20 Nationals played at Garryhill yesterday. Although it is not his favourite code the St. Mary’s 60×30 stalwart adapted his game to the needs of the occasion to see off the challenge of Ciaran O’Hare, Antrim 21-4, 21-4 before defeating the John Ryan, Carlow 21-11, 21-16 in an entertaining final. 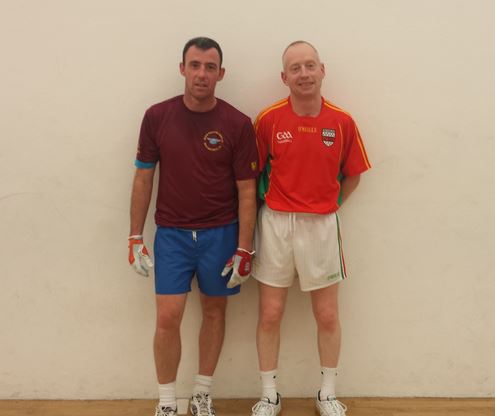 Hynes’s strong preference for the ‘big’ alley is well documented but when he decides to apply himself to the task of doing well in the smaller court he shows time and time again that he has the weapons to get the job done. Yesterday was no different!
John Ryan has been one of the top overage players in the country since he turned 40 and his terrific level of fitness is augmented by a great pair of hands and a high level of mobility. But even these attributes were rendered redundant when Hynes unleashed bullet-like serves and shots at various stages of the final.  And indeed he needed these when the ‘home’ player took a decisive lead in the second game but just when it appeared a tie break could be in the offing, Hynes pulled out six or seven ‘gems’ to save the day and bring the title back to Wexford.
Another magnificent display from a player who has served his club and county with distinction for a great many years.
RESULTS UPDATE
All of the early results can be found under Results on the menu bar. These will be updated as news filters through today……