Big weekend for Wexford players at festival of handball

The inaugural and innovative festival of handball (weekend 1) goes ahead tomorrow, Saturday and Sunday at Kingscourt when all of the All Ireland 40×20 adult singles and juvenile singles and doubles finals will be held. Four Wexford players will be part of this historic occasion and all will face a difficult task. 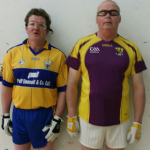 First into action at 7pm tomorrow evening will be Mick Armstrong (pictured left with semi final opponent John Nihill, Clare) in the Golden Masters B final against Tom McCormack, Mayo. The Connacht champion was very impressive in seeing off the challenge of Sean McNally, Down in his semi final and the Wexfordman who has been very close to winning his first ever 40×20 All Ireland singles title will have to be at his very best to succeed at the Cavan venue. McCormack defeated Wexford’s Stephen Murphy in the 2015 All Ireland 60×30 equivalent but Armstrong will be hungry for success and would not be winning out of turn. 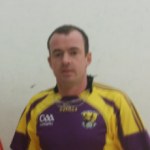 Fergal McWilliams has been very impressive throughout his Over 35 B  campaign and he crossed a very difficult hurdle when he beat Jamie O’Donnell, Cork in the semi final a few weeks ago. The final against Trevor Hannon, Galway is certain to present him with another mammoth task however as his opponent has been a perennial challenger at this stage of the championship for the past three years.  Unfortunately for him all 3 (2 singles and 1 doubles) have ended in defeat and McWilliams will have high hopes of making it 4. Its a first final for the Horeswood player however and understandably he will take the court as underdog, a tag he has overcome several times already this season. 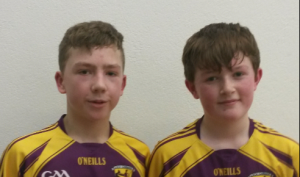 Diarmuid Moore and Josh Kavanagh bid to become only the third ever Wexford winners of boys under 14 doubles when they take on James Cummins and Enda Collins, Galway in Sunday’s final. Only Colin Keeling/Michéal O’Neill in 1992 and Jimmy Goggins/Paddy Berry in 2002 have succeeded previously and that gives some indication of the size of the task they face. Nonetheless the Wexford boys have enjoyed considerable success at many levels prior to this and they will not be found wanting at this level either. Diarmuid came in for the injured Richard Lawlor at the Leinster semi final stage and has been excellent while Josh too will revel in the occasion.