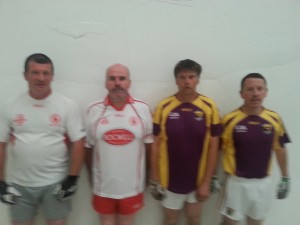 Conor Kerr of Tyrone starts with serve. The Tyrone pair hit the ground running and make two aces before Barron plays an excellent ball off the right side which secures serve for Wexford.  From here the Wexford pair make four aces with great kill shots from Doyle. Both teams have left handed players on the left side so this should make for some good rally play. Tyrone then win the toss and make a couple before Wexford win serve and make it 6-4. Tyrone then retake the serve but fail to make an ace as both Barron and Doyle play some excellent handball. Both Wexford players really forcing their opponents to the rear of the alley. Doyle then finds a good toss and make it 11-4 to Wexford before loosing his serve. Barron then pins the Tyrone players into either corner of the alley with some top class serving. This along with hard hitting from Doyle left Wexford with a commanding lead of 20-4. Tyrone lost their serve without making an ace and Wexford secured the first game 21-4, a deserving win as they played all the handball in the first game.
Wexford began the second where they left off the first and they certainly began to turn the screw early in the second game as they player some powerful handball. Both Barron and Doyle looked very sharp in the alley and raced into a 9-0 lead before they lost their toss. Kerr from Tyrone then made 3 aces before Doyle smashed a volley shot around the walls to win back serve. From here the Wexford pairing really took complete control of this encounter.  The Wexford players seemed to be on a different level in the alley. They lost their toss 19-3 up , at this point in the game there could be no comeback from Tyrone , could there? Not a chance as Wexford won serve after conceding one mark after Barron absolutely murdered a ball in the left corner. Wexford kicked on and won the second 21-4 . A great display from both Wexford men as they march on to a All Ireland final.