A journey worthwhile for Roche & Kelly 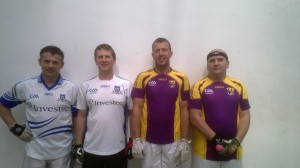 Report by Padhraic Roberts
Master B Doubles All Ireland semi final , Damien Kelly / John Roche beat Michael Clerkin / Peter Duffy ( Monaghan ) 17-21, 21-7 & 21-4
A great victory for the Wexford men as they progress into a All Ireland final. The Wexford pairing had a slow start in the first game and found themselves on the wrong side of a 17-21 scoreline. In the second game both Wexford players upped their game dramatically. The Wexford pair really found their range and powered to a 21-7 victory in the second. Roche and Kelly both player some great attacking handball throughout the match and showed moments of individual excellence also. The slaneysiders eased to a 21-7 victory in the second. So to the third and deciding game with Wexford to serve. The momentum was with the Roche & Kelly and they settled into the third as they finished the second in devastating fashion. The Wexford team made light work of their opponents in the third and really showed their class as they powered to a 21-4 victory in the final game. Another All Ireland final for team Wexford and a brilliant performance from both Roche and Kelly.